Cornelis Jacobszoon Drebbel is a long forgotten engineering pioneer. He worked amongst the ferment of new ideas and new technologies of early 17th Europe and like many clever men of the time was a bit of a showman – you had to be to attract the necessary funds from Princes and Kings – and touted his ideas around the courts of Europe.

And Cornelis travelling engineering show was pretty impressive; he developed, among other things; a thermostat, a solar energy system, special effects for masques such as rain, lightning and thunder, worked on drainage and water supply in Germany and in England, made an automatic lens grinding machine, a solar powered harpsichord, invented the first microscope, made exploding glass 'Batavian Tears' and designed a detonator that used them to set off torpedoes and sea-mines, and then went on to create fulminate of Mercury.

But his piece de resistance was the submarine...

In 1620 he managed to interest King James I and VI of England and Scotland in a radical new boat for his Royal Navy. Starting from the 1578 design by William Bourne he created a leather covered, wooden framed boat that could be rowed underwater. Over the next few years he created two more, finally coming up with a veritable submarine galleon, a six oared vessel that carried 16 passengers.

And this was not just some Leonardo-ish doodling on plans that never came to pass either, he built it and had it rowed for three hours 12 feet under the water, up and down the Thames between Westminster and Greenwich before an astonished King and thousands of his subjects.

But unfortunately the Admiralty didn't like the idea and it never saw use in combat. 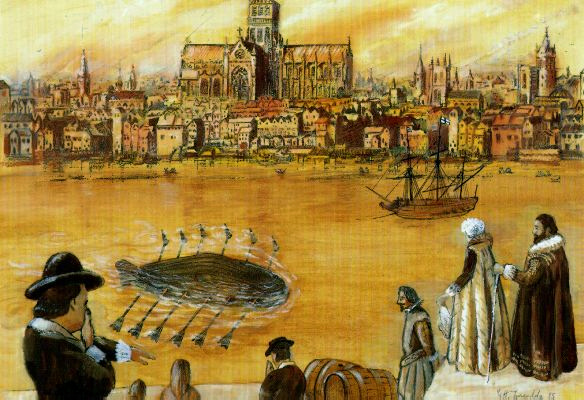 Modern engineers have suspected that Drebbel's device was in fact more hype than substance, but a modern reconstruction (extrapolated from descriptions and pictures admittedly) built of the BBC 'Building the Impossible' series did actually work.


Any, all or none of the following explanations may be true...