Alignment in the English Civil War


What's all this rubbish about Law and Chaos? No one in 17th century England, not even them drunkard Ranters, ever sat down and said 'Hi folks, I'm Chaotic!'.


Cavalier characters are, well, a bit cavalier. They are hearty fellows, pleased to live life to the full, but also a bit inclined to go into things cockeyed, like a cavalry troop at the gallop, hoping their natural panache will see them through if it gets a bit difficult. They like adventuring for the look of the thing, to pay for the fine wines, strong ales and rich living they intend to get done before Judgement Day or a stray musket ball takes them off this mortal coil. They are brave but easily discouraged if there's a bit of hard work to be done to get their just reward.

Roundheads are a lot more sober. They are stubborn and unwavering in the pike square, or when methodically reloading their matchlocks while the damn fool cavaliers bounce off their prepared positions. They measure twice and cut once, and do not suffer fools gladly. Sometimes they may be too cautious, but their feel their careful and planned approach to adventuring leads to a bigger and better pay offs in the long run than the cavaliers smash and grab raids.

Neutrals are everyone else; not too rash, not too careful, not liable to start a punch up over possession of a fine hat feather, not over obsessed with counting the gunpowder to the last grain and weighing its cost against the value of the purse in a highway robbery.


Royalists work from the top down; there's people in charge and there's people who ain't, it's just the way the world is. If you follow orders without whingeing and backchat and impress your betters you can get promoted, and might get to be considered a gentleman too. Loyalty is the primary virtue, everyone knowing their place in the world, swearing an oath to God and King and sticking to it the only honourable way. Being disrespectful to the King and Bishops is the next best thing to cheeking God himself, if these people weren't meant to be in charge why did the almighty allow them to prosper?

Republicans work from the bottom up. No man's opinion can be discounted for naught, all men have reason. The actions of the nation must be decided by a Parliament of equals chosen by the men of the boroughs, solid citizens who have earned the trust of their fellow man, not had position bestowed on them from above by a nincompoop who happens to have a fancy hat on. God made all men equal in his sight, all men should be equal before the law and government of the land also; that idiot Charles Stuart is merely a man like the rest of us, he would do well to remember it.

Neutrals can't make their minds up. The old ways worked, you knew where you were; you were probably face down in the mire with a noble standing on your head, but you knew where you were. Parliament? A lot of clever gents well learned in law, but would their way be any better? They certainly seem to be a lot more hardworking and upright than them fancy pants courtiers, but, ech, puritan lawyers...

The classic combos are Royalist/Cavalier and Republican/Roundhead, but there are plenty of neutrals on the Royalist side and a few dedicated roundheaded fanatics who will carefully plot in the King's cause. Likewise many Republicans are a bit cavalier, caught up in the romance of the revolt, inflamed by the bold words of the Scottish Covenant or the English Petition of Rights and highly likely to shoot first and ask questions later.

DCC alignment is important for Clerics. In the core book certain deities are of a given alignment, and I will cover religion in another post. It also plays a part in healing, with the table on p31 being divided into 'Same', 'Adjacent' and 'Opposed'.

In the two axis system see the chart below – one square horizontally, vertically or diagonally away from the Cleric's alignment is 'Adjacent', two squares away is 'Opposite'. 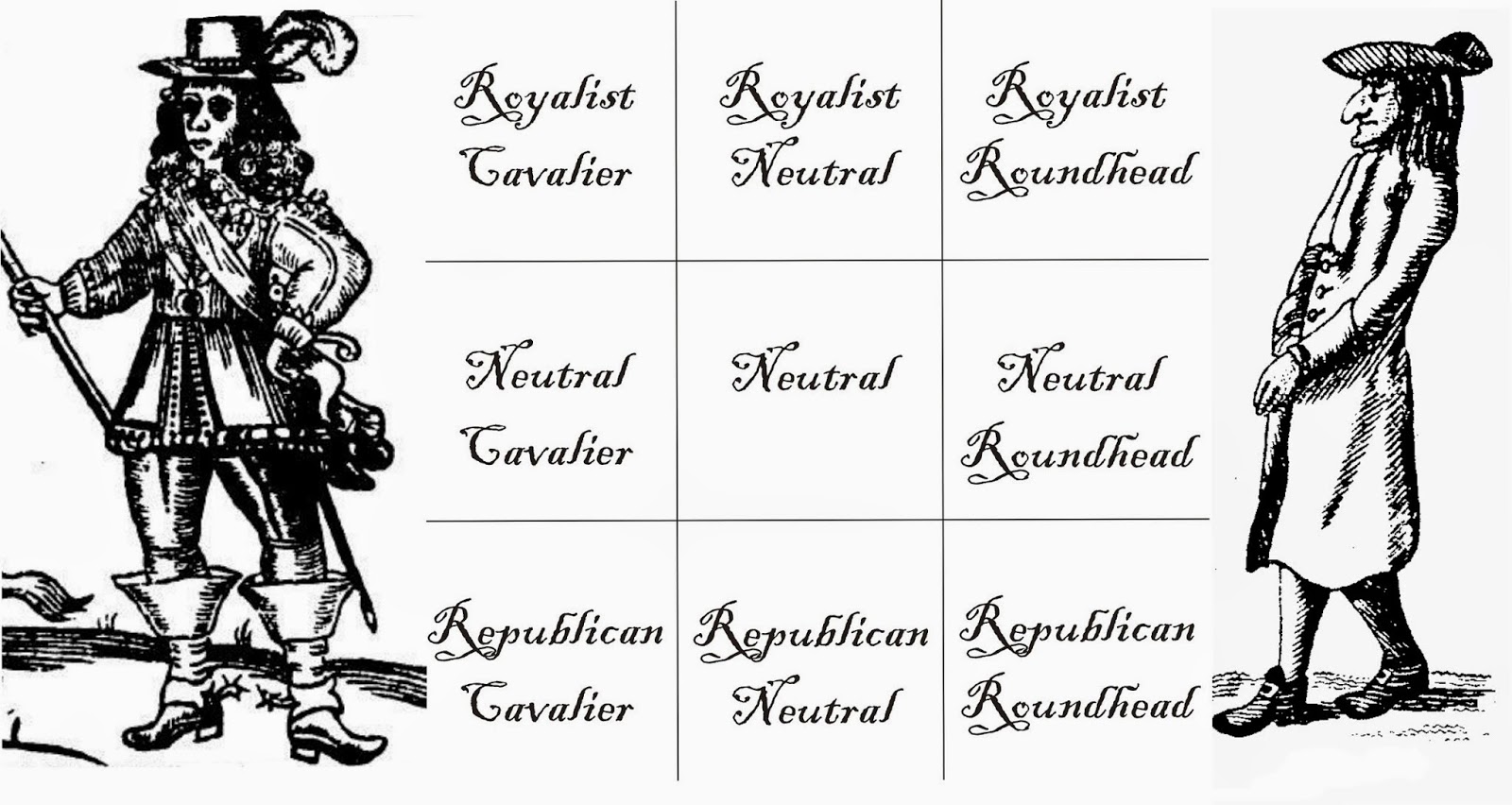 It might trouble some players as to why a difference in temperament and political opinion might lead to divine healing being of varying effect, especially when almost everyone claims to worship the same Christian God. And so it should...

The other major use of alignment in DCC is for thief abilities. Civil War Thieves get to use whatever table they like regardless of alignment, as long as they stick to that table throughout their career.


In the course of play actions that are in accordance with the characters declared alignment may be awarded with bonus experience points at the GMs discretion.

People with 'corner' alignments will get more opportunities for XP bonuses than 'side' alignments, and double neutrals, being wimpy middle of the road snivellers liable to be run down by carriages, will get no bonuses until they get off the fence.

Changing alignment from neutral to Cavalier, Roundhead, Royalist or Republican will cause no XP loss. Moving towards neutrality, or even to the opposite side, will cause an XP loss.


In addition changing from a Royalist to a Republican or vice versa may gain you a reputation as a turncoat. Royalists and Republicans will almost always fight each other anyway, but a traitor will have a bounty on his head and may well face hanging, drawing and quartering. Don't let the bastards take you alive!
Posted by Barry Blatt at 10:06