The Moon Lens is a discus shaped object twelve inches in diameter and a kilogram in weight. It is mainly made of a porous and crumbly grey rock, pitted in places and scorched black and melted in others with radial striations carved on one side. It has a copper coloured metal band round the circumference with engraved symbols. In the centre of the disc is a cylinder of quartz about an inch wide running through it, though its internal fractures and some cloudy patches make it impossible to see all the way through clearly. It can be thrown, but it is unwieldy and hard to aim.

The writing is in the Cretan Linear A alphabet and encodes four magic words which can be used by the last person to hold the object. There are a few other symbols, some obvious depictions of stars and of phases of the moon, other more obscure.

'Urnentu' makes the object temporarily weigh just a few milligrams. It can be thrown a quite ridiculous distance while in this state. A man with 18 strength and good discus technique could throw it into a low orbit.

'Gertu' will return the object's weight and bring it back from orbit to the user. It will scream down from the sky as a meteorite would and will thump into the ground with considerable force. It will be incredibly hot from re-entry and will take a good four hours to cool. It will hit somewhere within sixty feet of the user and if it hits a structure in that area the structure will suffer severe damage. If it falls into water it will sink in a gout of steam and will need recovery from the bottom. It was not designed to float and there is a 50% chance that the thing will crack from its too sudden cooling and become useless if it hist cold water. The Moon Lens will not return if it is on the ground, the word will merely make it heavy once again.

'Irki' will cause a light to shine from within the quartz, focussed in a narrow cone that is maybe an centimetre wide at a distance of ten feet. It is barely detectable at twenty feet as it is not very bright.

'Bidtuko' will make anything fully enclosed by the cone of light on the striated side teleport to any surface touched by the cone of light on the other, plain side, moving instantaneously. You have to be two hundred miles away to have a cone wide enough for a human to be so transported, and the effect works in straight lines only – the curvature of the earth is not taken into account by the device, so it has to be well above the horizon on the peak of a very tall mountain and will shoot the user somewhere into the depths of space. Transport is one way unless the user find some cunning way to turn the disc over while it is hundreds of miles away in the depths of space.

Using Comprehend Languages on these words will tell you their meanings – Furthest, Closest, Open and Travel – but not how to pronounce them and thus activate the magic. That will take the recovery of some Cretan inscriptions in both Linear A and B and a ferocious amount of linguistic knowledge to work out the sound values of each letter; the logograms between these magic words will remain undecipherable by any means. The language may be recognised as a remote ancestor of Basque.

The lens was made by an ancient civilisation who had somehow fallen out with the Selenites and wanted to invade the moon. With knowledge of Newton's Principia and Opticks (the Method of Fluxions wouldn't hurt either) and a really big and a well engineered catapult capable of shooting the thing into a precise orbit with the striated side facing Earth, it should be possible to calculate when the light beams are facing from Earth to Moon, how large they are and where they fall and with a word transport a body of men from Earth to Moon – where they will probably promptly suffocate from lack of air as the original invaders did back in 2000BCE.

Newton and other natural philosophers will have the necessary maths worked out by the 1710's, though an army of 'calculators' will be needed to work all the arithmetic out by hand, sufficient engineering precision will be achieved by 1730 when accurate sextants become available, though lack of knowledge of the speed of light and of special relativity will make planning any transfer further than the Moon a very dicey proposition until the 1930s.

Mucking around with it as it flies around in low Earth orbit, the best most adventuring parties are going to manage, will randomly shoot objects and people from Earth into space and from space back to random locations on Earth as the magic words are abused. Until they get a handle of what is going on there will be a spate of disappearances they may only hear about by rumour or news pamphlet, and if the disc is flying upside down all kinds of random interstellar crap might end up back on Earth, from deposits of moondust, toxic interstellar gas clouds (by far the most likely option) or wisps of the atmosphere of Jupiter, rains of fire as bits of a stellar corona turn up at ground level, and if the PCs are very unlucky and their GM is very evil, the sudden irruption of an asteroid or misplaced aliens from a planet far, far away. 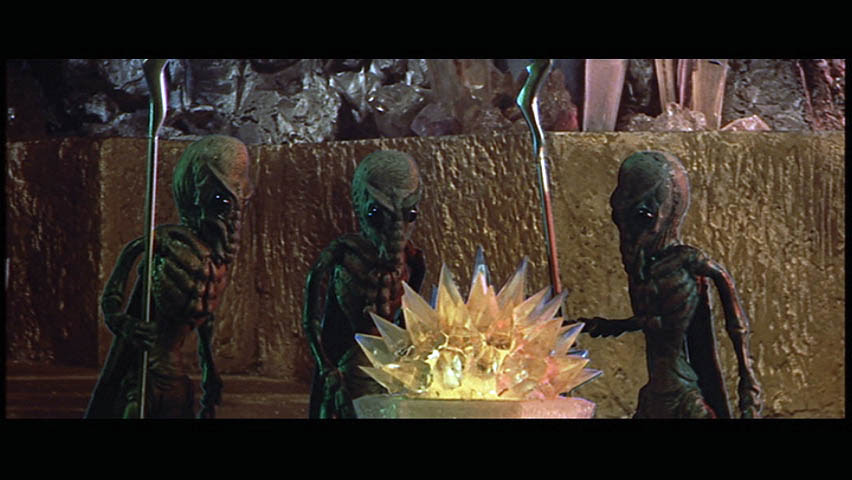 In addition the Selenites aren't stupid. They remember well when the ancient Atlanteans tried to invade and (after laughing until their spiracles hurt) regularly check with their surface observatories for the tell tale flashes of magical light from below even after all these millennia. Their troglodyte civilisation is not what it was, but is still capable of launching a spaceship to go investigate what those idiots from Earth are up to now.
Posted by Barry Blatt at 14:11