Daniel Axtell was a Puritan and one of the few outright fanatics in the Parliamentarian Army.

He started out as a 'Particular' Baptist, a fairly hard-line sect who believed in:


He was a London apprentice and joined the Parliamentarian army in 1643 at the age of 21, at first in John Pickering's regiment of foot, one of the highly effective Eastern Association units which became John Hewson's regiment after Pickering's death in 1645 and one of the core units of the New Model Army. He served at the siege of London in May 1644 and at Marston Moor later that year and in plenty of other skirmishes besides.

He served with distinction in Kent putting down the Royalist uprising there as part of the Second Civil War, and was one of the officers who held down the London mob during Pride's Purge, when the army threw out all the moderate MPs likely to vote against the execution of Charles.

He was commander of the guards at Charles' trial and threatened to shoot Lady Fairfax for interrupting the trial and was later accused of coaching his men to disrupt the trial himself with cries of 'justice' and 'execution' and of being rude to the King.

Axtell was also a preacher, and since in the 1640's preachers still had to be licensed by the church this meant turfing a priest out of his pulpit and giving vent to his own hellfire and damnation brand of Baptism. He became a Fifth Monarchist, a small sect of outright fanatics who believed that the Civil Wars were the prelude to the second coming of Jesus in 1666 and that they would be the saints who would rule a thousand years under his divine kingship.

He was a Major during the invasion of Ireland and was the man mostly responsible for starting the massacre of Drogheda, persuading the Royalist commander Aston to surrender and, after he and his men had laid down their arms, shooting the lot of them. Aston was beaten to death with his own wooden leg by men of Axtell's regiment and their cries of 'no quarter' were taken up by troops all over the town.

He was court martialled by Henry Ireton after doing the same on an even larger scale after the Battle of Meelick Island on the River Shannon, and was captured by Royalist privateers on his way back to England and held on the Isles of Scilly. He was lucky not have been hung by Irish troops in the Scilly garrison.

After being freed he returned to Ireland as governor of Kilkenny, Ireton having died of dysentery in the meantime - no doubt the judgement of God in Axtell's mind for challenging his methods - and led a reign of terror there until he clashed with Henry Cromwell, the new Lord Deputy there under the regime of his father, Lord Protector Oliver Cromwell. Henry tried to be conciliatory to the Irish and to expel the extreme Baptist officers who had come to Ireland under the previous Deputy Fleetwood and who were among the worst oppressors of the long suffering civilian population.

A Republican die hard to the very end, Axtell took up arms against the restoration of Charles II, but was captured and eventually hung drawn and quartered in 1660 for his part in the execution of Charles I, his 'I was only following orders' defence doing him absolutely no good. From the scaffold he declared his loyalty to the Good Old Cause and prayed that Charles II would convert to a Godly way of life. 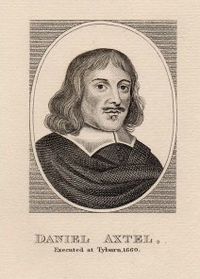 In 1643 Axtell is young ensign of 21, sporting the cropped haircut of a London apprentice that earned the Parliamentarians the nickname of 'Roundhead' and looking like a street thug stuffed into a uniform, which is what he essentially is. But he is a very religious thug, never using actual curse words and backing up his sneering condemnation of the Royalists and gentry with Biblical quotations, especially from the Book of Revelation. He is very sure of himself, he is of the elect earmarked for a place in heaven and he knows it, and he is a stern disciplinarian, never letting an opportunity to berate his men for drinking, swearing and slacking in their drill pass him by. Fortunately many of them are pretty religious themselves and those who aren't are itching to get assigned to another company.

He doesn't like his captain, a gentleman slacker in Axtell's opinion, who lack of fervour in his prayers will get him a bullet out on the battlefield. Sure enough he gets one in an engagement in mid-1643 resulting in Axtell's promotion and in the confusion no one seem to notice it was in his back...

Att +2
Can use Defend and Press
Cleric spellcasting level 1: Spells 1 Praise the Lord and Keep Your Powder Dry
Languages: English

Buff coat
Sash in regimental colours
Lobster-tail helm
Pikeman's armour
Sword (d8)
Brass knuckles, engraved with the message 'From a loving Mother to her Prince of Peace'
Matchlock musket with three crosses scratched on the stock for Royalists shot, room for plenty more
Musket stand
Bandoleer of 12 apostles, plus a thirteenth marked JC for Jesus; Axtell's 'lucky' bullet
Powder horn
Bag of 20 shot
Spare matchcord
Purse with 1s 8d
Normal clothing
Whistle
Pocket Bible
Plain wooden cross on piece of hemp
Stern letter from his father exhorting him to Godly behaviour
Page torn from a chap-book bearing a woodcut of King Charles and the message (in Axtell's handwriting) 'Yore ENNEMY'; will be pinned to a tent pole or wall whenever Axtell's unit are encamped