John Lilburne was a Leveller agitator and was for brief spell in 1647 the most dangerous man in England.

The Levellers were a potentially revolutionary group who emerged from the political/religious campaigners who objected to the arbitrary rule of King Charles and the heavy handed religious authority of Archbishop Laud. They stood for votes for all (all men anyway, but still pretty radical for the 17th century), freedom of speech, freedom of worship, free trade and free whatever else. They did not go as far as the Diggers, who were communists who held that all property should be held in common, but they were radical enough.

John was born in Sunderland in 1615 and was born one of the awkward squad as his father had been the last man to insist on trial by combat over some obscure court case with Ralf Claxton, and was only stopped by order of the King himself.

He was a friend of John Bastwick, one of the three Puritan pamphleteers who got their ears cut off and branded by order of Archbishop Laud in 1637 for preaching against bishops. John got caught up in this case for actually printing the words of the mutilated men and was forced to flee to the United Provinces. But he returned pretty quickly and was taken to the notorious Court of Star Chamber on a charge of unlicensed printing.

He refused to recognise the authority of the much hated court and refused to take the oath. He was flogged and even while stuck in the Westminster pillory he defied the censors, making speeches to passers by and somehow managing to spread yet more unlicensed and inflammatory pamphlets. He was gagged and taken back to Fleet prison for another good kicking, but his fame amongst opponents of the regime was assured – he was 'Freeborn John', the man who would just not shut up and bow his head to the tyrannical King, and some supporters even struck a medal in his honour.

In 1642 he joined the Parliamentarian army as a captain and fought at Edgehill, but was captured at the battle of Brentford. The Royalists threatened to put this notorious gadfly on trial for treason but Parliament warned that if they started to execute prisoners of war they would do the same. He was returned to his comrades through a prisoner exchange.

During army service he became a friend of Cromwell as both had fallen out with the Earl of Manchester and had a low opinion of his generalship. However he then fell out with the entire army in 1644 over the Solemn League and Covenant which committed them to imposing Presbyterianism on England in return for the military support of the Scots Covenanters. And in the meantime he had also argued with his old earless colleagues Bastwick, Prynne and Burton, and the MPs who had made sure he got his freedom in the early days of the Long Parliament.

By 1646 he had become such a pain in the arse he was locked up by Parliament in the Tower of London, and true to form he kept up his polemics from behind bars rising even further in the estimation of the London mobs who were becoming disenchanted with the by now Rump Parliament.

He helped write An Agreement of the People, the Leveller manifesto and while out on bail took part in the mutiny of the New Model Army at Corkbush Field. He organised the Levellers as a political party, elected 'agitators' among the London apprentices and spoke to huge gatherings of supporters. He ended up behind bars again for sedition. Released again in the hope he would help impeach Cromwell he, as usual, took his own line, trying to get the NMA to accept the Agreement as a constitution before putting the King on trial. He refused to sit as part of the court that tried Charles as without constitutional authority it was a mere kangaroo court that ruled by might, not right.

His later career was a mish-mash of trials, another stint in exile and general chaos, characterised by his spirited personal defences in court. He seems to have tried to give up politics and become a soap-maker (possibly so he had a ready supply of boxes to stand on), but his big gob and large opinions continually dragged him back into the fray, and the last years of his life were spent more or less permanently locked up in Dover Castle. He finally converted to Quakerism and in his last pamphlet said he was giving up politics for good. He died of a fever aged 42 in 1657. An obituary supplied this epitaph -

Is John departed, and is Lilburne gone!
Farewell to Lilburne, and farewell to John...
But lay John here, lay Lilburne here about,
For if they ever meet they will fall out.

His lasting contribution to politics was the idea of 'freeborn rights', rights that you are born with, not granted by a government but by God, and since he was a passionate advocate of freedom of religion he didn't give much of a hoot which version of God you worshipped. The 'unalienable rights' of the US constitution and the 'human rights' of many a modern charter are the direct descendants of this idea, and Lilburne's defences have even been quoted in US courts in cases relating to freedom of speech. 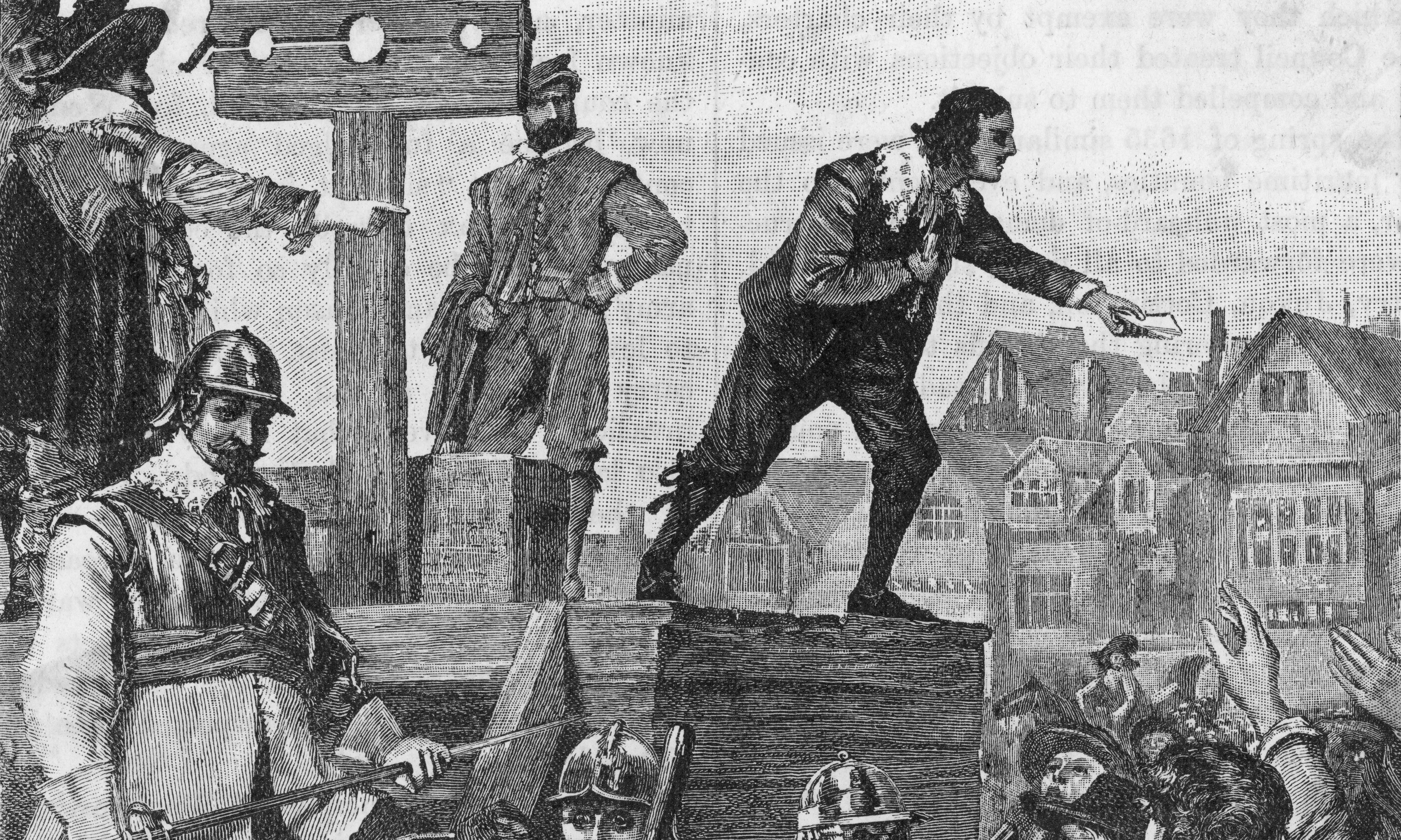 What have the Romans - err King - uh Parliament - ever done fer us!


As of 1642 John is 27 years old, a captain in Lord Brooke's regiment of foot. He is well known among political activists, especially those in London, as Freeborn John, and by his superior officers as a barrack room lawyer of the most irritating kind. He does insist that proper military discipline and fighting the king with all your might is the only way to see common men like us get a fair crack of the whip in a future egalitarian England, and his men think he is great and have taken to reading the kind of inflammatory pamphlet he distributes among the regiment.

Att +3
Can use Defend and Press
Languages: English, Dutch, a smattering of legal terms in Latin and Norman French

Buff coat
Sash in regimental colours
Morion
Pikeman's armour
Sword with basket hilt (d8, plus cestus for 1d3)
Flintlock pistol
Powder horn
Bag of 20 shot
Purse with 12s 10d
Normal clothing x2, sewing kit
Spare set of boots
Whistle
Ink, paper, 2d3 letters to/from people he is currently arguing with and one to/from his wife.
Copy of 'News from Ipswich' by William Prynne
Copy of 'Institutes of the Lawes of England', second part, by Sir Edward Coke
Copy of 'The Letanie of Dr John Bastwicke'
1d12 misc. subversive literature and news sheets
Pocket book with detailed accounts of pay for each of his soldiers and himself down to the last farthing, current arrears heavily underlined. Also list of infractions of standing orders and military regulations by superior officers.
Posted by Barry Blatt at 04:09